Recently Samba and in turn FreeNAS have added support for a Samba share to act as a SMB based Time Machine Target for Apple devices. We had a need for allowing multiple users to backup to a Time Machine Target but didn’t want them to have to enable encryption with a password they may forget and not be able to recover. At the same time, we didn't want users to be able to restore/browse someone else's backups.
The solution we came up was to change the create file mask/umask to give effectively the equivalent of umask 077 or chmod 700 to all newly created files/folders on the share. Samba and ACLs means that attempting things like force create mode or force directory mode have no effect when using FreeNAS.
One requirement was that the backups be self-maintaining and non-conflicting of storage allocation. To accomplish this, we set per-client storage quotas in addition to any quotas for the total backup volume.
Another feature we wanted was the ability to backup when on a network that was routable to the backup target fileserver, but not in the same subnet/VLAN. We found that you do not need to rely on mDNS broadcasts and use an Avahi mDNS Reflector (which we tried at first, it does not work for Time Machine Backups). What you can do instead is use tmutil from the command line to manually specify a Time Machine Backup Disk. This is persistent across reboots and will allow backups even over a VPN.

TL;DR of the goals and solutions

Connect to a SMB Time Machine Target on a different network

If your Time Machine Target and Client Machines will not always be on the same subnet, you can use tmutil to manually set a target. Then, as long as your Client has a route to the Target, your automatic backups will function. They will also function over VPN, which could be a good thing or a problem. For our organization, we added an Alias IP to the FreeNAS server and created a separate A-Record to point to it. This way, the same server can act as a fileserver to serve files to VPN clients as well as be a Time Machine Target. We did not want to consume our end-user's home/mobile upload bandwidth, so we blocked the Target's Alias IP at the firewall to prevent Time Machine from working over VPN.

Popular posts from this blog

I've written a bash script to automate the entire process of setting up any of the EM/MC74XX series modems (Generic, Dell, Lenovo). This assumes you have the Sierra card inserted into a USB enclosure. This post is part of my Sierra Wireless LTE Modem Guide Series . If you prefer to skip the blog nature of these guides and just grab the bare features and commands, my  GitHub repository  will serve as the authoritative source for this entire series. Any changes or updates will occur there first. From the script description: - Only for use on Ubuntu 18.04 LTS LiveUSB - All Needed Packages will Auto-Install - Sets MBIM Mode with AT Commands Access - Changes all models of EM74XX/MC74XX Modems to the Generic Sierra Wireless VID/PID - Clears Band Restrictions and Places Modem in LTE only mode. - Flashes the Current Generic Firmware as of 2018-07-18 Link to script: https://github.com/danielewood/sierra-wireless-modems/blob/master/autoflash-7455.sh If you are feeling bra
Read more 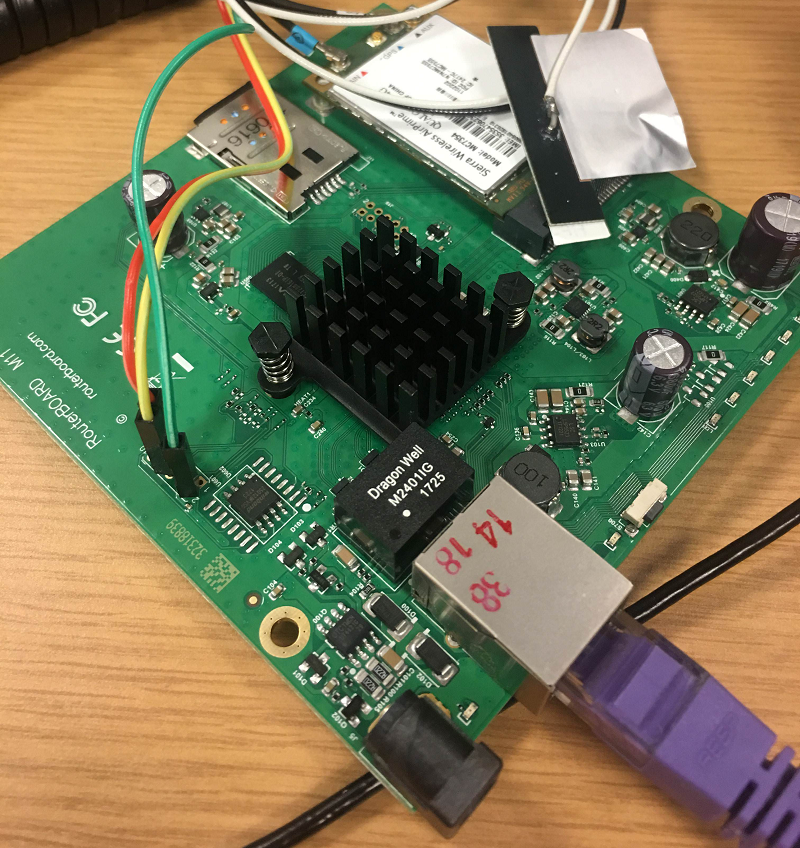 Installing OpenWRT/ROOter on a RBM33G/RBM11G Download the latest ROOter for the RBM33G Putty portable tftpd64 portable Extract all of the above to:  C:\Users\Public\Downloads Setup Network Interface connected to RBM33G/RMB11G POE port: IP: 192.168.1.2 Mask: 255.255.255.0 Gateway: 192.168.1.1 DNS1: 192.168.1.1 Disable Windows Firewall From an administrator command prompt: NetSh Advfirewall set allprofiles state off Configure and start tftpd32/64 Option 1: Overwrite tftpd32.ini with  this one  and start tftpd64. Change the BootFile name if needed. Option 2: Use screenshots for the settings, restart tftpd64 after you make your changes Open Putty to the COM port of your USB to Serial Adapter with a baud rate of 115200 Plug in/powercycle your router, press any key within 2 seconds to enter setup. Boot from the network by pressing the following key sequence: o - boot options e - ethernet o - boot options b - boot
Read more

The Sierra Wireless LTE Modem series is a very popular choice among those wanting the maximum performance out of their LTE cellular service. The modems are extremely affordable on the second-hand market, cover a wide range of frequencies, and are all factory unlocked. You can buy just about any second-hand Dell branded EM7455, plug it in, and go. Unfortunately there is a bit of a learning curve that goes along with them, but this guide will hopefully serve to make that a short and simple process, rather than a week long process of investigation a researching. This post is part of my Sierra Wireless LTE Modem Guide Series . If you prefer to skip the blog nature of these guides and just grab the bare features and commands, my  GitHub repository  will serve as the authoritative source for this entire series. Any changes or updates will occur there first. In this series, we’ll cover the following topics: (GitHub links mean that the blog entry is not yet complete)  - Modem Perfo
Read more